Let me share the anecdote happened last week while I was traveling to Guntur from Hyderabad to conduct CS Pathshala Trainer workshop at Nidubrolu.

I woke up at 3:00 am and got ready to take MMTS (local) from Lingampalli to Secunderabad at. 4:25 to catch Secunderabad to Guntur special train scheduled to start at 5:30 am. Missed the local train by 30 secs. I came back home and took my car and rushed to Secunderabad railway station. I have managed to arrive on platform 5 min. to 5:30am and the train was delayed by 20 min. Finally, I have boarded the train and took my seat in A/C chaircar.

As usual I bought two news papers Saakshi (Telugu) and other Deccan Chronicle (English) on the platform before boarding the train to pass the time for 4 hours and it helps to catch up with the news as I do not watch TV nor I regularly read news paper.

Thirty mins into the journey, Idly-wada vendors arrived. I picked one. Another 30 min passed. Newspaper is half read. I saw a boy with his mother in the seats opposite to mine. He may be 10-11 year old. He played video games for a while on his mobile. He started enquiring, how long it is going to take? How many more stations to reach Guntur? Why is the train stopping so many places even when there is no platform?

There is no wonder even adults get bored on train journeys why not children. I thought let me engage him in a conversation and help his mother as she is having tough time to handle his questions.

I kicked off conversation. Introducing my self, “I am Hari” extended my hand for a handshake.

He reciprocated. “I am Aryan” 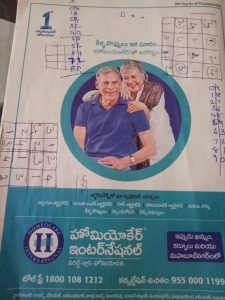 I asked “do you play Sudoku.” I have Sudoku puzzles in the newspapers.

“No. He avoids working on anything he finds tough. “, his mother explained.

All the Sudokus in the dailies were 9×9. I remember my generalization and decomposition lesson from Vipul and Sonia two weeks ago. Let me test, if it works. I made up a 4×4 sudoku by trial and error and invited Aryan for the play. He was hesitant. His mother encouraged. “This is simple. You can do it.” He leaned over, observing.

I Said, “hey, 4×4 is also not easy. shall we break into four 2×2. ” and drew thick boarders to differentiate the small grids. I said “Let us try filling the four grids one by one. In each grid we attempt to fill in an order 1, 2, 3 and four. Since there are only four grids and has to count first four numbers only . He found it is not bad and continued to pay attention. 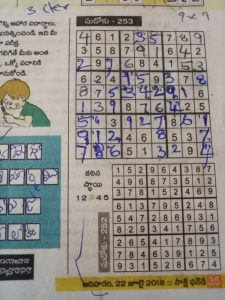 We made two iterations. Filled all 16 cells with no number repeated in any of the columns or rows or a grid. He found a sense of accomplishment and smiled. I took the opportunity and asked ” shall we do 9×9 sudoku now”. There is a plenty of time. He said OK.

Mean while he said he is coming from USA and he is in 6th grade. He is here to visit his family. He comes every year. Then I took out Sunday special edition in Telugu. I said don’t be scared. We will break 9×9 into nine 3×3 grids and fill each grid one by one. Only difference is we have to go through 1 to 9 instead of 4. This small leap in thought is not bad. He ventured. Half way through, he started doing on his own. We had to make three iterations and is done.

He started feeling proud and said “I am going to teach this to Krishna”,his cousin at Guntur who he is going to meet now.

His Mother corrected”Krishna is only two year old,so he won’t understand”. Then she revealed that they have sudoku books back in California,but they never tried to work on them. Meanwhile they got a call from his father. His father asked her ” how is he doing? When Aryan is completely engrossed infilling the cells one at a time and grid by grid. She was saying happily,that he is busy solving sudoku. Then she enquired , whether she can get sudoku books in India. I told most of the book shops will have them. She said Aryan had a memorable experience and which he will never forget in his lifetime.

I wished them all the best, they know now, what to carry on their subsequent train journeys and become busy rather than bored.