It was at the beginning of the academic year 2015- 16 that we teachers at Vikhe Patil Memorial School were informed of a new initiative that was designed to make students think and learn Computer Science logically. Being extremely intrigued by it, a subsequent initiation session was conducted by Vipul Sir and his team in which they gave us more information about ACM and its mission and introduced the program “Code to Learn”. This initiative being one of its kind, and a practice that we had never encountered before, we teachers were all very impressed by it. So in March 2015, our school management asked us to redesign the curriculum for Computer Science. 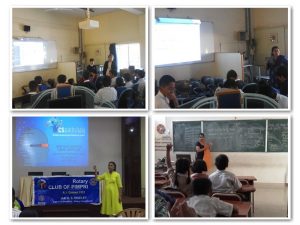 In the meantime, CSpathshala conducted their first workshop for numerous schools together, and witnessing the prior enthusiastic approval from all of us for their team, our school decided to participate in the workshop as well. So successful and knowledgeable was their very first workshop that all the 4 teachers of our Computer Science Department unanimously decided to join their pilot project. This decision of ours soon turned out to be the pivotal point for the method of teaching Computer Science at our school. In the first year of its course, with Vipul Sir and his team’s valuable help, we taught the new curriculum to students up till the age of standard V. In the second year, taking a huge leap forward, we increased it to teach the students of standard VIII. “Learn Computer Science without Computer” though an ironical tagline, has proved to be a massive hit with our students who have overcome their initial puzzlement by being given puzzles and alternative fun techniques to solve them. They have now started enjoying it so much that they now request even more theoretical classes. Seeing the enjoyment and the progress of our students, their parents are equally appreciative of this new initiative. Some of the compliments that frequently come on the way are “Thank you for giving more importance to logic than syntax”, “Some good changes coming up in the Computer Science subject”, “Thank you for making my child understand how to solve problems logically”. My personal liking for this subject apart, the approach and attitude portrayed by the team of CSpathshala has endeared our faculty to them even more. Giving untiring explanations to our numerous queries, giving full support in making our work easier, being ever ready to accepting changes suggested by teachers are valuable factors that have made this team such a pleasure to work with. This approach by the CSpathshala team in fact even prompted me to help them out with translations that were required to be carried out from English- Marathi for their proposed courses. I can definitely say without hesitation, that my interactions and work with this team has helped me tremendously in being a teacher and growing as one, and opened the path to being a volunteer with this remarkable team.