CSpathshala team visited schools from Idar, Prantij and Talod talukas of Sabarkantha which have the Computer labs and Digital Boards to enable implementation of the CSpathshala curriculum. The team conducted sessions for the students and teachers which included patterns, parity bit activity and solving 4×4 and 6×6 Sudoku using a systematic approach (algorithm) to solve one grid at a time to solve the entire puzzle. 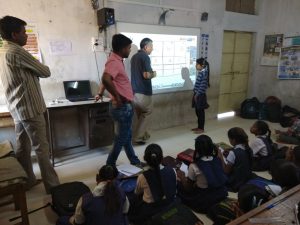 Majority of the students at Eklara School (Idar) were excited and  eagerly participated in solving 4×4 Sudoku and moving on to a 6×6 with a systematic approach to Problem solving. Students were able to comprehend Patterns, identify and share the examples in and around the classroom of not just simple pattern but also tessellations. All the subject teachers attended the sessions and are keen to take the process ahead. The Principal shared that there is a need for more training for the teachers and then the school would be able to implement the curriculum. 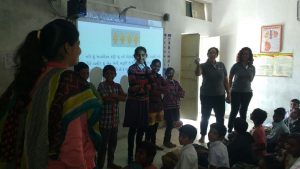 At Palachar, Prantij, a majority of children belong to the economically lower strata. Children from the slightly better off families are sent to the private schools. With a high literacy level in the village, a large number of girls regularly attend school. The school has some of the best facilities including a library program which is open to all children and they are encouraged to read atleast one book per week. What was also interesting was that the children could read English paragraphs with ease. 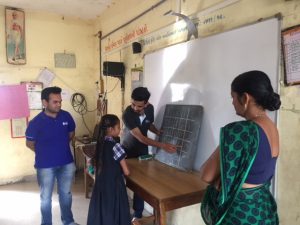 With a keen participation from the children and good comprehension skills, they were able to solve the 4×4 sudoku and solved a 6×6 too. The students from the primary who had already completed the Sudoku lessons were enthusiastic lot able to solve Sudoku confidently. The teachers who were Maths, language and all subject teachers participated in the sessions taking the lead in explaining the additional examples.  The Principal and teachers shared that they had tried Scratch Programming and need additional training to teach.

Maukamji Na Muvada, Talod, with a strength of 104 students. Initially the children were shy and hesitant to participate in solving the examples and  were grappling with the basic concepts of Maths of odd and even numbers. The Principal and the teachers shared that this village was a small hamlet with low literacy with 100%  population belonging to Socially and Educationally Backward Classes as declared by the Gujarat government. The school also had a high drop out rate and low attendance rate which has now improved due to the mid-day meal and also the additional milk that is provided. Owing to the low economic background and dependency on daily wages during the harvest season, the attendance in school drops as the children accompany their parents to the fields. 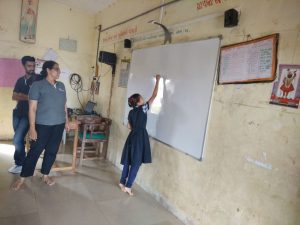 The challenges in all these schools being no dedicated teachers or periods for computing and existing teachers overburdened with administration responsibilities. The community of teachers in the schools who are Maths, Science, Social Science or Language teachers together implement the CSpathshala curriculum. With only one or two teachers having attended the training program, the others are not equipped to implement the curriculum.

There are various questions and challenges that have surfaced after this visit – can we say that  Bringing Computational Thinking to Schools with a standard curriculum translated into the local language can bring about a visible impact amongst the students?

How do we pave the way for making a positive impact on the students in Problem Solving and Logical reasoning with this disparity in the level of teachers, comprehension skills of the students and the geographic spread of these schools?